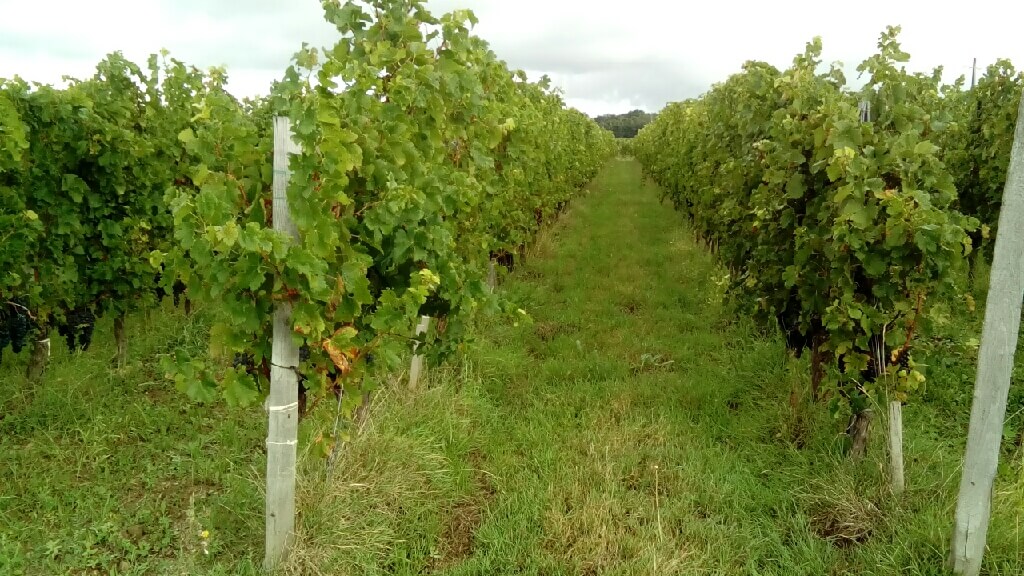 The Bud burst :
After a winter marked by a few below-average cold spells, February was characterized by an unusual mildness, particularly in its second half of the year. This sweetness continued in March, encouraging early and qualitative budburst. Then cool spring temperatures slowed down the growth of the vines, allowing spring green work (first and second tying up, thinning out the leaves on the bunches).

The Flowering:
The flowering which took place from May 24th on the Merlot and June 1st on the Cabernet, accompanied by a fairly mild and dry weather, followed by a very homogeneous setting during the first and second week of June.

The Veraison:
The months of June and July were characterized by very strong episodes of heat reaching more than 40 °, and punctuated by brief water offal. The healthy rainfall on July 26 and 27 accelerated the veraison and maintained the phenological homogeneity at the beginning of the season. Mid-ripening was reached between August 4 and 5 on both Merlot and Cabernet Sauvignon, and ended quickly. During August, the leaves stopped growing and the grapes became full of tannins. Biodynamics has allowed us to keep the soil fresh with horn dung sprays.

The Harvest:
The climatic conditions at the flowering, setting and veraison stages were very favourable to the early development of the aromatic palette of the grapes and to a particularly high anthocyanin loading.
The harvest began on September 21 on Merlot and October 1 on Cabernet.

The Wines:
The abundant harvest is exceptionally qualitative with complex and refined flavours. The wines have a good length on the palate and a lot of fruit. A fine 2019 vintage

The Bud burst:
After a winter and a beginning of spring marked by strong bad weather (Episodes of violent rains and frequent storms), the bud burst of the vine began around April 10th. From the 26th of this month the first bunches were visible with a nice exit.

The Flowering:
The blooming that took place over a short week from May 23rd. During this period a slight hail hit May 26 on Fougas, causing no damage to the bunches but eventually requiring a significant manual cutting because the apices of the branches had been chopped, leaving the vine grow in width rather than in height. We also did just after this episode several biodynamic treatments based on horsetail tea to prevent any attack of mildew

The Veraison:
The months of June and July were characterized by very high heat reaching more than 30 °, and marked occasionally by brief water offal of extreme violence, while the month of August, scorching, was dry without no rain. By August 7, the vine was mid-veraison. During this month, the leaves stopped growing and the grapes were loaded with tannins. The biodynamics allowed us to maintain the freshness of the soil thanks to sprays of horn dung.

The Harvest:
The harvest took place from 22 September on the merlot, and the following weekend on the cabernet. The skins of the grapes were thick and tasty, but the juice was not very important because of the drought of summer and September.

Wines:
The scarce harvest is exceptionally qualitative with complex and refined flavors. The wines are now in barrels with a good length in the mouth and a lot of fruit. This year, we innovated and some of the wine is aging in amphora ...

After a long period of rain in the spring, an episode of heat wave this summer for more than four months without a drop of rain, vine asked for 2016 sustained and redoubled entire growth careful...

The Bud burst :
After a mild winter and little rain, almost Mediterranean, the instability of the sky was installed from March throughout the spring with an unusual freshness. Bud, late, started in the first half of April in the rain.

The Flowering :
After frequent rain events, flowering came under sun and a favorable heat of 20°C for a week from May 28.
With already eight days late compared to the previous year, well-fertilized flowers produced pretty long and abundant clusters.
The rest of the spring was very wet, requiring special attention to prevent all diseases.

The Veraison :
At 14/08/16, the grapes were veraison mid with a delay of fifteen days on annual averages. “Veraison” was very smooth promising a harvest of exceptional regular maturity.
The heat wave moved from July and throughout the month of August without any rain event.
Fearing the blocking of maturity by drought we plowed the soil during that month in accordance with the old peasant saying: "A plowing worth two watering," which ensured perfect water regulation. Thus the vine has not suffered from the heat or lack of water. We accompanied the work of several treatments of biodynamics.

The Harvest :
September was unusually sunny and about in the summer heat, favoring a perfect late maturation and very homogeneous. The harvest took place from 1 to 8 October in the sun...

The Wines :
The wines have rich fruit, freshness, color and tannin. They are full, dense, fine and velvety. All is harmonious. The 2016 vintage is already beautiful !!

The Bud burst:
To facilitate bud burst, we treated the vines with two successive lots of horn manure in February. After a normal winter when rainfall was sufficient to replenish water supplies in the soil, cool weather in March delayed bud burst in the vineyard, thereby averting the risk of spring frost. Bud burst began in the first week of April, followed by a very mild spell when the buds were able to bloom with great phenolic consistency.

The Flowering :
At Château Fougas, this began towards May 27 with the Merlot and finished consistently towards June 6. We controlled flowering using a biodynamic spray of silica on the leaves along with nettle tea.

The Veraison :
The heat wave at the end of June, when the berries had yet to change color, did not cause any scorching on the fruit. Quite the opposite in fact – the fruit had to cope with water stress that was conducive to a thickening of the skins and higher tannin content. Several biodynamic treatments helped improve the quality of the berries during this period. Subsequently, rainfall and high humidity levels throughout July promoted the start of ripering on July 22. This then ended rapidly around August 7 for the Merlot and August 12 for the later-veraison Cabernet-Sauvignon.

The Harvest :
Harvesting began early with the Merlot on September 18 and later for the Cabernet Franc and Cabernet-Sauvignon.

The Wines :
The wines display beautiful natural acidity. They are deeply colored, highly aromatic and contain exceptional tannin content.
It is often said that vintages with a “5” are legendary in Bordeaux and that is certainly the case for our 2015s which will be magnificent!!

Your browser is out-of-date!

Update your browser to view this website correctly. Update my browser now